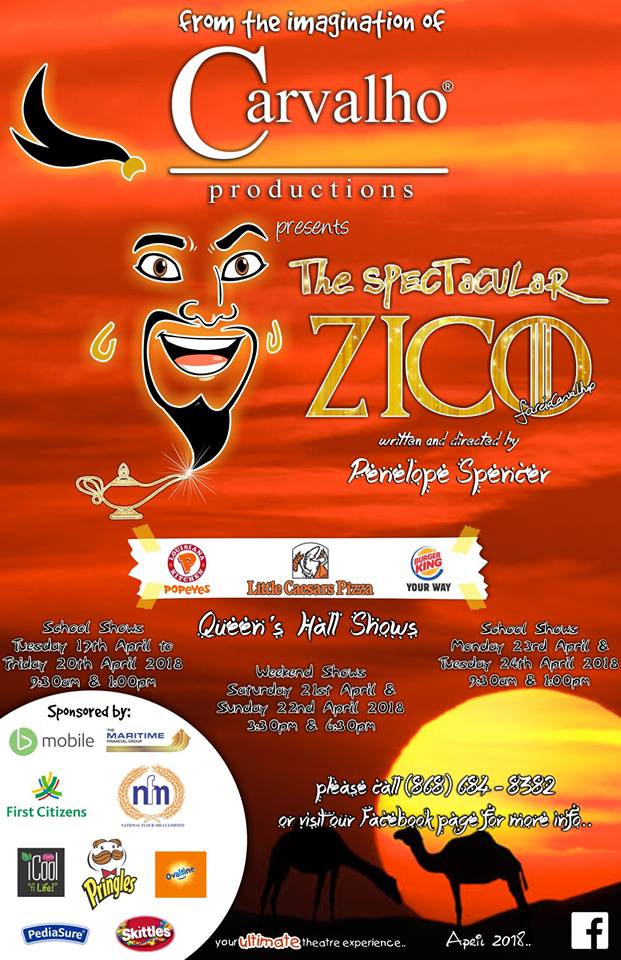 From the imagination of Carvalho Productions , the undisputed leader in Children/Family theatre production, we invite you on a magical journey: “The Spectacular ZICO!”. Carvalho Productions has entertained thousands of Trinbagonians over the years. Our new production, conceptualized by veteran actor/producer Mr. Fareid Carvalho, introduces new dynamic talent of Trinidad and Tobago, written and brought to the stage under the esteemed direction of multiple Cacique Award winner …Ms. Penelope Spencer. The production promises the usual Carvalho signature of fun filled learning, a showcase of the diversity of our local culture and lessons on the importance of respecting our elders. Patrons can look forward to riveting acting performances, exciting dance numbers, theatrical makeup and breath-taking sets.”

This localized tale as old as time opens in a market scene with a grand Palace as the backdrop, where a young peasant girl runs into a young boy and sparks fly as they smile and sing together. We will soon learn that this young peasant girl is actually Jewel (played by Rebecca Elias) the Princess of the Kingdom and the boy is Aldon (played by Mr. Fareid Carvalho) who goes through some difficult decisions that most children have to make while growing up. Thankfully he makes all the correct decisions with the help of his friends Wally, Cat, Monkey, Mat & the rest of the cast. He then gets his wish of marrying the Princess.”

This production is approved by the Ministry of Education and is sponsored in part by: Ministry of Community Development, Culture and the Arts; Little Caesars Pizza; Popeyes; Burger King; Dairy Dairy; bmobile; Maritime Financial Group; First Citizens; Duracell; National Flour Mills Limited, iCool, Pringles, Ovaltine, PediaSure; Purell; Fitzroy and Skittles.
“The Spectacular ZICO!” runs daily at 9:30am and 1:00pm Wed 18th to Fri 20th and Mon 23rd to Tue 24th . On Saturday matinee shows will be at 3:30pm and 6:30pm.