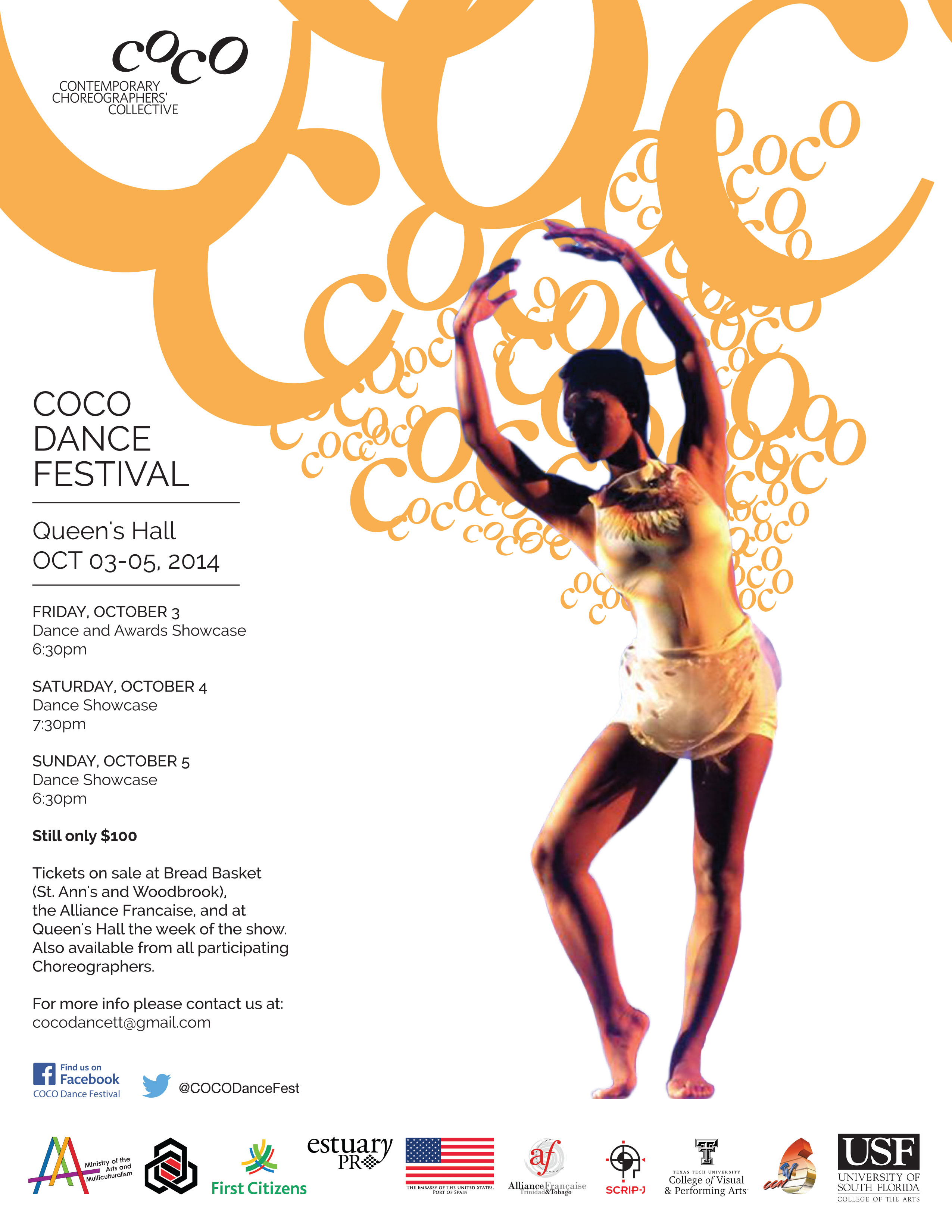 Trinidad and Tobago’s Foremost Platform For The Presentation Of Innovative And Experimental Contemporary Choreography Features A Diverse Cast of Local, Regional And International Choreographers

Following its 2014 call for submissions, Trinidad and Tobago’s foremost platform for the presentation of innovative and experimental contemporary choreography, Contemporary Choreographers’ Collective (COCO) Dance Festival, is set to deliver an iconic season of dance. The festival will open with the annual COCO Awards followed by an evening of dance on Friday October 3, 2014 at 6:30 p.m. at Queen’s Hall. Performances will continue nightly until Sunday October 5, 2014. To mark the launch of the COCO Dance Festival 2014, His Excellency Mr. Jacques Sturm, Ambassador of France, will host a private function for media and sponsors in collaboration with COCO and the Alliance Française de Trinité-et-Tobagoon Monday September 22, 2014 at the Résidence de France.

As Trinidad and Tobago’s singular curated and juried dance festival, the 2014 instalment of COCO will feature a diverse cast of guest and selected choreographers from Trinidad and Tobago, Canada and the USA. The guest cast features New York’s Battery Dance Company with support from the Embassy of the United States of America, the University of South Florida’s Dance Program and University Dance Company (UDC) of Texas Tech Universitywith support from the TTU’s College of the Visual and Performing Arts. Successful applicants chosen by COCO’s screening committee include Akuzuru, Brittany Williams, Deliece Knights, Jacob Cino, Jelae Stroude-Mitchell, Jillene Forde, Juan-Pablo Alba-Dennis, Kinesha Charleau, Sade Chance and Santee Smith. In COCO’s partnership with the Prime Minister’s Best Village Trophy Competition via its community-based outreach initiative, COCO in the Community, finalists from the Best Village competition are selected to perform. This year, Ibis Dance Company directed by Sherma Burke, New Edition directed by Jodie Daniel and Eh Beh Oui Don Don directed by Kizzy Murray were selected. To round out the festival, the works of two of COCO’s founders, Sonja Dumas and Dave Williams, will be presented.

Lovers of dance and the performing arts can look forward to a different programme of performances on each night of the festival. Tickets for the festival cost only TT $100 and are available at Alliance Française de Trinité-et-Tobago, Bread Basket in St. Ann’s and Woodbrook, participating choreographers and during the week of the festival at Queen’s Hall. For more information, please join the COCO Dance Festival 2014 Facebook (FB) event page at http://x2t.com/20/COCO or connect with COCO on FB at www.facebook.com/COCODanceFest or on Twitter @COCODanceFest or send email to cocodancett@gmail.com.

COCO came to life in 2009 with a mission to inspire, encourage and serve the community through creative processes and collaborative endeavours. An initiative of dance professionals and founders Sonja Dumas, Nancy Herrera, Nicole Wesley and Dave Williams, the festival emboldens choreographers to push the envelope with pioneering choreographic approaches that explore contemporary and post-modern forms of dance and movement. As a collective with a focus on carving a space for a contemporary, post-modern and experimental dance aesthetic, COCO has revolutionised Trinidad and Tobago’s dance landscape by steering the development of collaborative and interdisciplinary approaches to the production of art, performance and lecture. Through relationships fostered with the University of Trinidad and Tobago’s (UTT’s) and the University of the West Indies’ (UWI’s) dance programmes, the festival nurtures and mentors budding choreographers by providing a professional platform for performance and experimentation supported by direction in the development of choreography. Since its inception, COCO has showcased the works of its founders alongside those of dance and creative arts practitioners from multiple disciplines and training centres across Trinidad and Tobago, Jamaica, Canada and the USA.