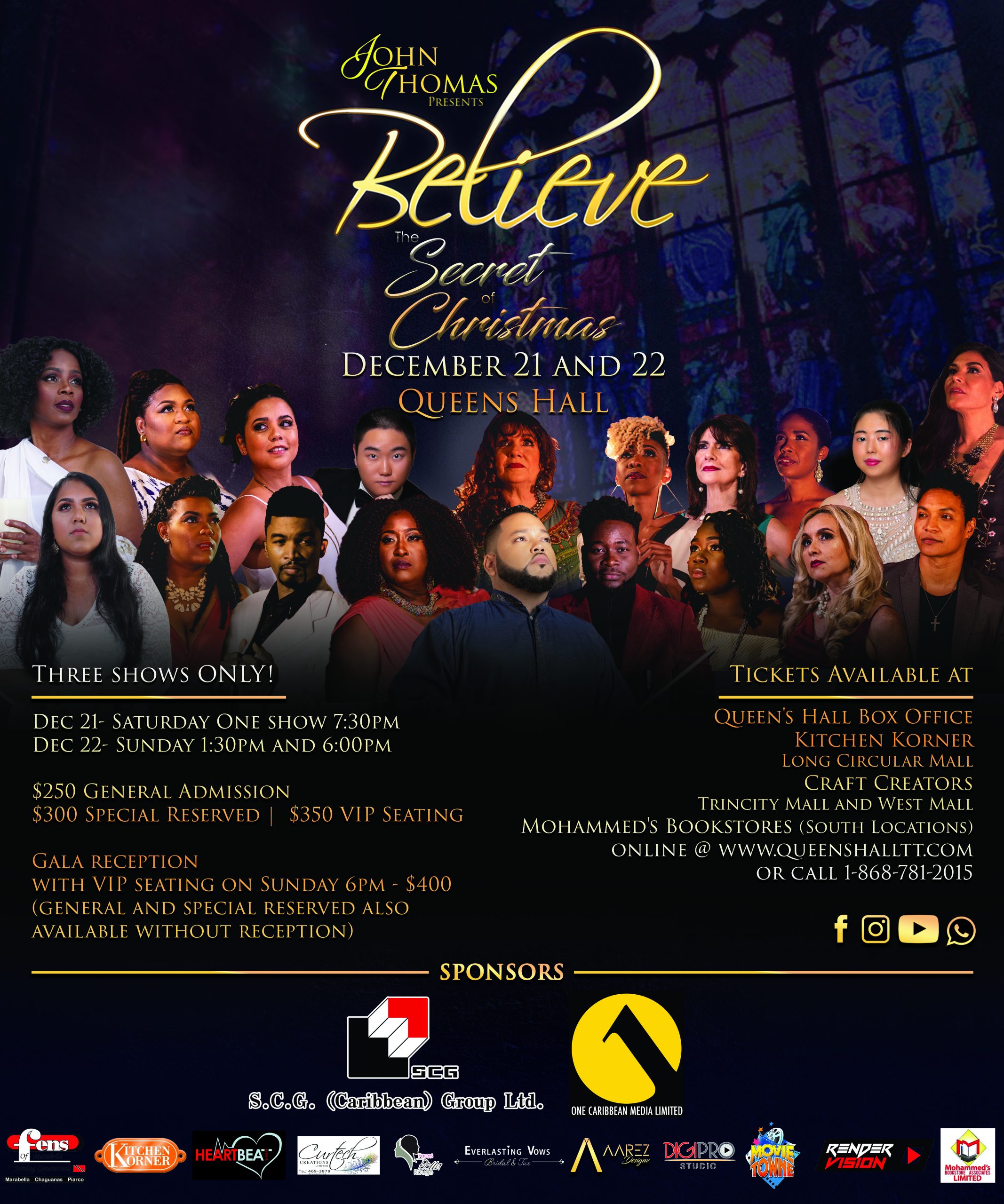 “This December 21st and 22nd, the dynamic cast of “Believe” returns to the stage at Queen’s Hall bringing to you yet another revolutionary concert-going experience. What a better way to usher in Christmas than an evening spent with family and friends at “Believe” The Secret of Christmas! Clean entertainment for the entire family! An inspirational evening featuring your most favourite classics and Christmas music from the more traditional settings to some of today’s modern arrangements including all your most loved carols and Yuletide favourites, “Believe” perfectly captures the true spirit of the season.” said local tenor and impresario John Thomas at Believe Press Conference and Cocktail Event held at Fiesta Plaza, Movie Towne, Port of Spain on Tuesday 3rd December.

Shanghai Construction Group( Caribbean) Company Limited will be partnering with the Believe franchise and is titled as the official sponsor. Thomas thanked SCG Co Ltd  for the contributions  that they have made to the development of our country with regard to physical and economic development of Trinidad and Tobago.  He further stressed to make public their quiet efforts with regard to cultural and social development as they continue to realise their social and corporate responsibilities. “We are proud to partner with this company that believes in our great land and is committed to seeing it  flourish.”

The evening was spent with an array of talent described as a teaser for what is to come. Guests and media representatives were then invited to a post cocktail reception. Amongst the audience were various media personalities such as Celia Scott, Jamie Thomas and other, former first lady Mrs Hassanali, Patron- Lady Hochoy Homes, Senator Clarence Rambharat and his wife, various representatives of the Ministry of Community Development Culture and the Arts, and prominent members of the local performing arts fraternity.

Over the two days, three showings would be staged. One on Saturday the 21st December at 7:30pm and two on Sunday 22nd at 1:30pm and 6:00pm respectively. The Gala show, being the Sunday 6:00pm event would start with a cocktail at 5pm for VIP patrons and invited guests in the Helen May Johnston Room.

Let the celebrations begin! With soulful Inspirational music, carols and more for all audiences, including your favorites, O Holy Night, Joy to the World and the ever magnificent Halleluiah Chorus and so much more! The most beautiful collection of awe-inspiring music you’ll hear this year! Don’t miss this incredible occasion when friends, family and neighbours come together to celebrate the spirit of this wonderful season! Tickets Available at Queen’s Hall Box Office, Mohammed’s Book Store (South Locations), Craft Creators Trincity Mall and West Mall, Kitchen Korner Long Circular Mall, online @ www.queenshalltt.com. For more information please call contact the believe hotline @ 1-868-781-2015.

Believe – The Secret of Christmas