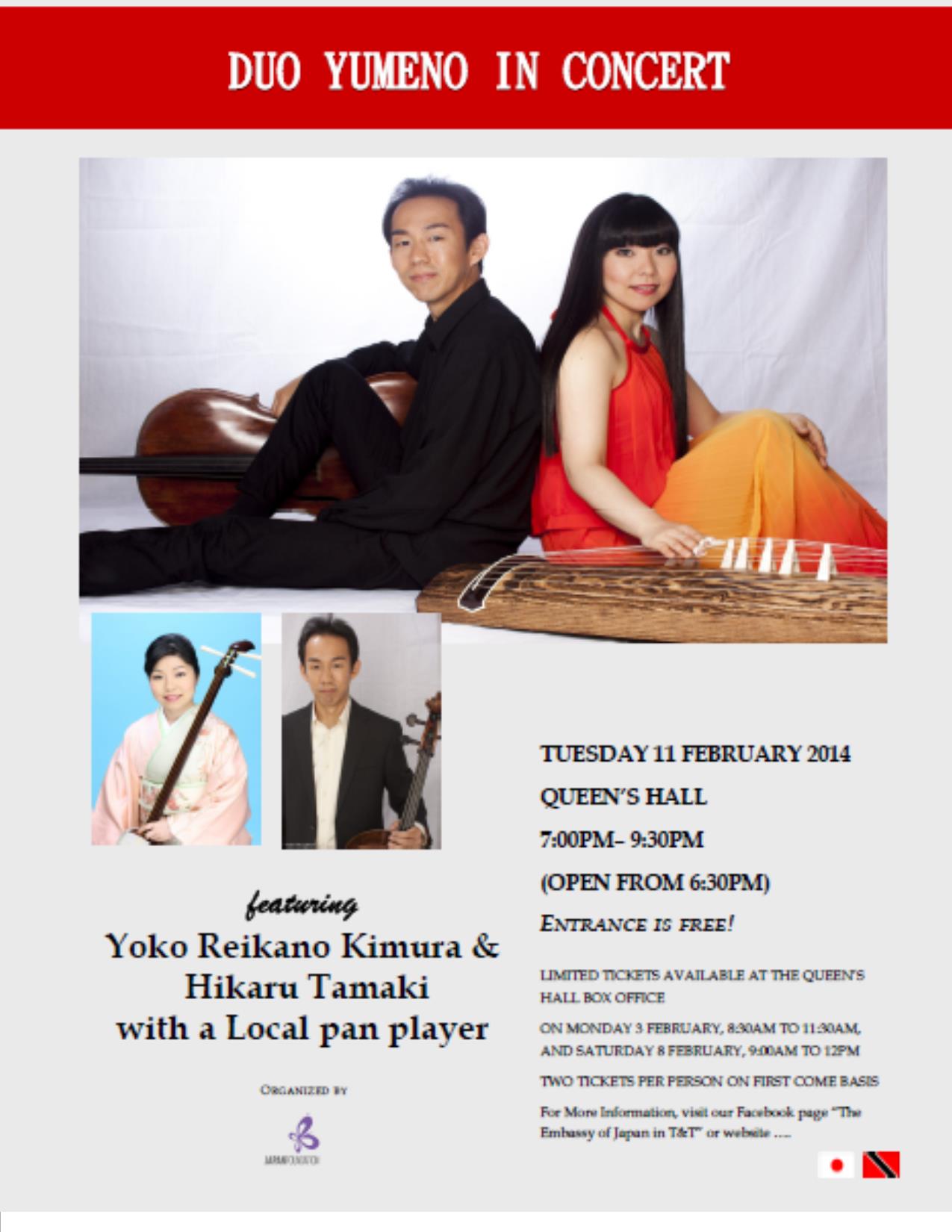 The Embassy of Japan is delighted to inform you that a traditional Japanese music concert is going to be held in the evening of Tuesday, February 11, 2014 at the Queen’s Hall, POS, to officially kick off the 50th anniversary of the diplomatic relations between Trinidad and Tobago and Japan as well as Japan – CARICOM Friendship Year 2014.

New York based musicians Yoko Reikano Kimura and Hikaru Tamaki, who had been performing as the ‘Yoko & Hikaru Duo’ since 2008, recently made a fresh start under the moniker ‘Duo YUMENO.’ Kimura (koto, shamisen, vocals) and Tamaki (cello) offer a unique fusion of sound that explores both traditional Japanese and Western classical music, commissioning new worksand creating their own arrangements. They have recentlycompleted a successful four-year performance project in Japan and the U. S. that included an annually commissioned work by American composer Marty Regan. They were invited to Turkey in 2013, performing in such cities as Istanbul and Tekirdag. Together they were awarded the Janet Latz Professional Fellowship 2011.

Koto/shamisen performer and singer, Yoko Reikano Kimura hasconcertized around the world. For her koto playing, she was toutedas “beautiful” and “genuinely talented” by Hogaku no Tomo (Japan). The New York Times described her shamisen playing and singing as “superb”. She graduated from the Tokyo University of the Arts and Music. Yoko has won numerous awards including the First Prize at the prestigious 10th Kenjun Memorial National Koto Competition as the first Yamada school player. Since 2004, Yoko has performed in such countries as Poland, Switzerland, France, Lithuania, Korea, China, Israel, Qatar, Italy, Turkey and the South America.

Currently the principal cellist of the Fort Wayne Philharmonic, Hikaru Tamaki also concertizes regularly as a soloist and a chamber musician. Before joining the Philharmonic, he was an associate principal cellist of the Chicago Civic Orchestra and performed under the baton of Daniel Barenboim at Carnegie Hall. Born in Kyoto, Japan in 1975, he studied with Noboru Kamimura and Peter Seidenberg. Hikaru was a prizewinner in the prestigious All Japan Viva Hall Cello Competition in 2000. In 2009, he began collaborations with his wife, Yoko Reikano Kimura (koto/shamisen) and they have given concerts and workshops at various cities in Japan and the US.