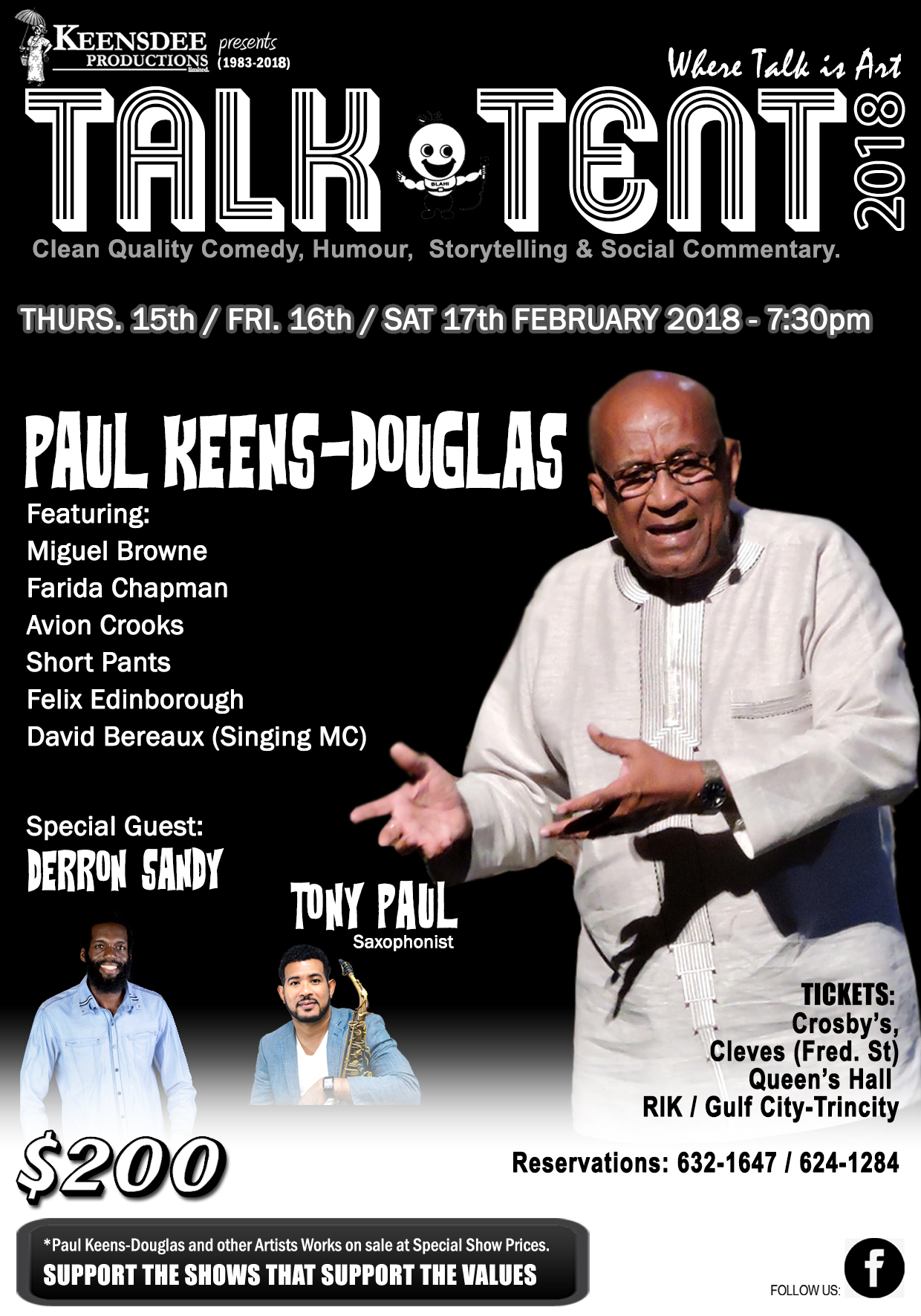 Trinidad and Tobago’s Annual Carnival Talk Tent will celebrate its 35th Anniversary with performances at Queen’s Hall from Thursday 15th to Saturday 17th February 2018 at 7.30pm. Patrons can look forward to three days of top quality, humorous and thought-provoking entertainment suitable for all audiences. The longest running Talk Show in Trinidad and Tobago, the Talk Tent,  produced by Paul Keens-Douglas has been promoting the many facets of the Oral Traditions since 1983. Featuring performers such as Miguel Browne, Farida Chapman, Felix Edinborough and Short Pants, all teachers and educators, and hosted by singing MC David Bereaux, the show has now become a popular after-carnival event that attracts both locals and visitors alike.

Each year, the Tent features well-known and up and coming artistes as special guests. This year’s audience will enjoy the musical vibes of popular saxophonist and musician Tony Paul and the lyrics of spoken-word poet Derron Sandy and Idrees Saleem who will feature on the Friday show. An unsponsored show, the Talk Tent depends on the support of its fans, supporters and those who recognize the importance of its role in preserving this genre of Caribbean culture. Books, CD’s and DVD’s of the various artistes will also be available at special show prices.

Tickets for all shows are priced at $200.00 and are available daily from 10am to 6pm at the QH Box Office.

The son of a prominent Grenadian family, raconteur Paul Keens-Douglas was born in Trinidad, but spent his early childhood in Grenada where he attended Wesley Hall Methodist School and Presentation Boys College. A pioneer in the development of the oral traditions and the use of the vernacular as a literary form, he produces the annual Tim Tim storytelling show and the  Carnival Trinidad Talk Tent which he started in 1983 and which is the fore-runner to today’s well-promoted talk shows. Wholesome and family oriented his work has a wide appeal that covers all classes and age-groups and has given the world characters such as Tanti Merle at De Oval, Vibert, Sugar George, Bobots, Slim & Tall-Boy, Tingalae , Dr Ah-Ah and others.

A self-published author since 1975, he has produced to date nine volumes of work, fifteen albums, three videos, sixteen CD’s and two DVD’s.  His work has been featured in many anthologies and well-known international publications and has been translated into German and Japanese. His many awards include the Humming Bird Silver-Culture/Character Club of Canada/ Zora Neale Hurston-Folklore/ Cacique-Drama/ First Citizens Maestro Extraordinaire. In Voices In The Century, a special millennium edition of the CARICOM Perspective, Paul along with Louise Bennett of Jamaica was highlighted for their contribution in shaping the course of Caribbean development in their area of cultural concern. Indeed Paul Keens-Douglas is seen more as a regional personality rather than belonging to any particular territory.