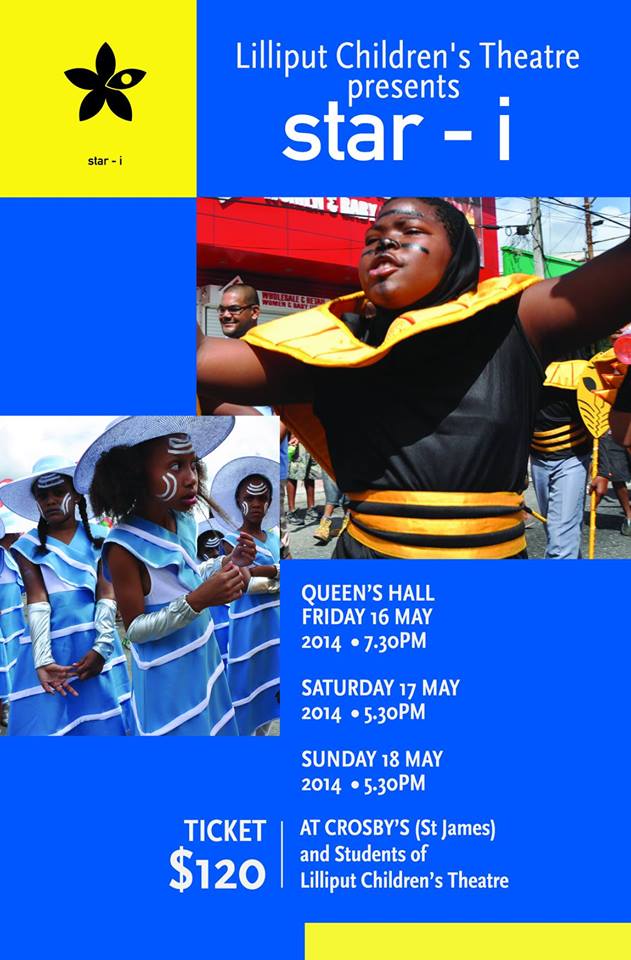 May 6, 2014 – Port of Spain, Trinidad and Tobago… This year, Trinidad and Tobago’s premier children’s theatre company, Lilliput Children’s Theatre, invites audiences to join their magical journey in poetry as it tells the story of the universe with star-i. This mythical adventure in song and dance opens Friday May 16, 2014 at 7:30 p.m. at Queen’s Hall with shows nightly at 5:30 p.m. until Sunday May 18, 2014

Weaving a rhythmic tale as seen through the cosmos, spirits, animals and plants, Noble Douglas’s veteran children’s theatre company takes on its latest awe inspiring production. “star-i promises to take us on a journey through space and time in a poetic mythic storytelling form incorporating movement, music and of course, costuming and the creative input of all the beautiful, blessed children,” shared Lilliput’s drama director, Wendell Manwarren.

This year’s production was inspired by the creative concepts of former Lilliputian, Ayodhya Ouditt, in Lilliput’s 2014 Kiddies Carnival portrayal, star-i. In his first year as Lilliput’s costume designer, Ouditt presented his interpretation of mythology with costumes that depicted various elements of the universe. Through journaling and game play executed under the direction of Manwarren and drama tutors, elisha efua bartels and Tonya Evans, the young thespians were charged with translating Ouditt’s creative vision into a script crafted by their creative minds.

Lilliput Children’s Theatre teaches theatre arts to children aged 7 to 18 and dance to children aged 3 to 18. It was founded in 1975 and encourages self-confidence through the challenge of theatre, game play and imagination. The theatre’s production team is led by founder and artistic director, Douglas and drama director, Manwarren, supported by drama tutors, bartels and Evans and dance instructors, Evans, Arlene Frank, Charlene Harris, Charlene Rollock and Louanna Martin. For more information, email liza@estuaryPR.com.