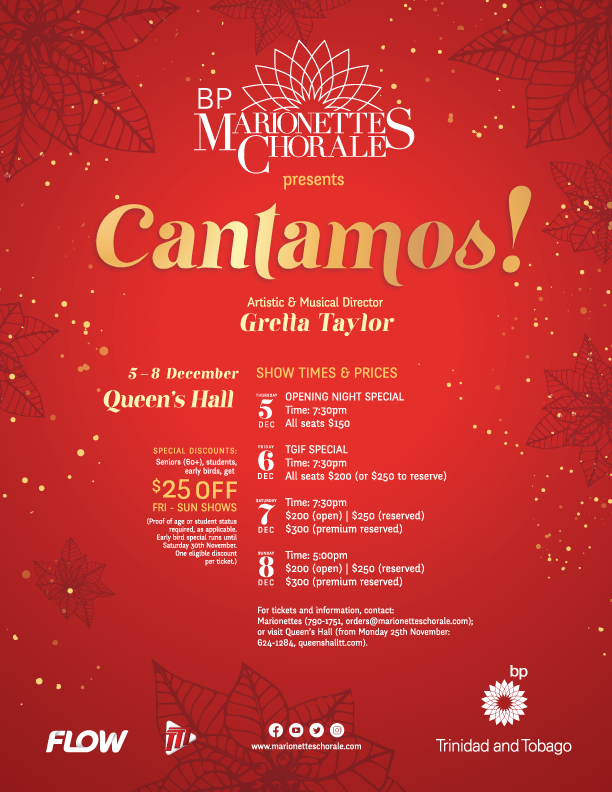 ‘Cantamos’ for Christmas with the Marionettes

The Marionettes Chorale, under the artistic direction of Gretta Taylor, will stage its annual Christmas concert at Queen’s Hall, from Thursday December 5 through Sunday December 8, 2019. Titled Cantamos, the concert marks a monumental 56 years of choral music and song performed for highly appreciative audiences both locally and further afield. Their faithful patrons—now spanning generations— always declare that once December rolls around, their Christmas really begins with the Marionettes!

Much of the music presented over the years by the Marionettes’ adult, Youth and Children’s choirs explores one recurring theme—one which greatly influenced this year’s production title, “Cantamos”, (Spanish for “Let’s sing”). Central to many of the selections is the notion that music builds bridges and is a universal language through which all of humanity can connect and unite. Indeed, it’s the reason that has brought so many into the Marionettes family over so many decades, building a joyful community and sharing their talents for a greater, common good.

Over the course of four nights—and their special matinee for care homes—patrons will be treated to a musical and visual spectacle, with a repertoire that explores classic, traditional pieces and segues into contemporary, local and international Christmas favourites.

In a special tribute to the incomparable Jessye Norman who passed away earlier this year, the choir will perform This Christmastide (Jessye’s Carol) along with Spirituals and Gospel selections like Go Tell it on the Mountain, the jubilant Andre Thoma Gloria, and I Sing Because I’m Happy— Rollo Dillworth’s rousing arrangement of His Eye is on the Sparrow.  Popular excerpts from Christopher Tin’s Calling All Dawns will be re-visited—evoking memories of the chorale’s Carnegie Hall performance last June—and arranger Desmond Waite will bring flavourful soca adaptations that patrons know and love.

Interestingly, yet another exciting international invitation has been extended to the Marionettes and more about that ambitious, cross-cultural project will be revealed within the coming weeks!

“BPTT is a proud sponsor of the Marionettes Chorale because we believe that their impact goes beyond their performances,” says Claire Fitzpatrick, BPTT’s Regional President. “The chorale is an institution which uses music to promote art and culture and has offered a stage for both young and mature artistes to develop their talent.”

Among the powerhouse talents singing lead are Jacqueline Johnson and Hermina Charles, Deborah Nahous and Errol James. Also making their mark from the Youth Chorale are soloists Dominique Akal and Zachary Joel, among others.

Proudly sponsored by BP, Flow, and TTT Cantamos by the Marionettes is a must-attend event. It will certainly prove, yet again, that even after 56 years, the chorale has no plans of slowing down and will keep adding to T&T’s storehouse of cherished musical memories.

“Christmas with the Marionettes: Cantamos” takes place from Thursday December 5 – Sunday December 8 at Queen’s Hall. Show time is at 7.30PM except on Sunday which is 5.00PM. Tickets range from $150 – $300 and are available from members and at Queen’s Hall Box Office (from November 25). For reservations, visit the websites: marionetteschorale.com and queenshalltt.com; find Marionettes on Facebook, or call 790-1751. Do enquire about specially discounted tickets for ‘early bird’ bookings, seniors, students under the age of 18 and Patrons of Queen’s Hall.