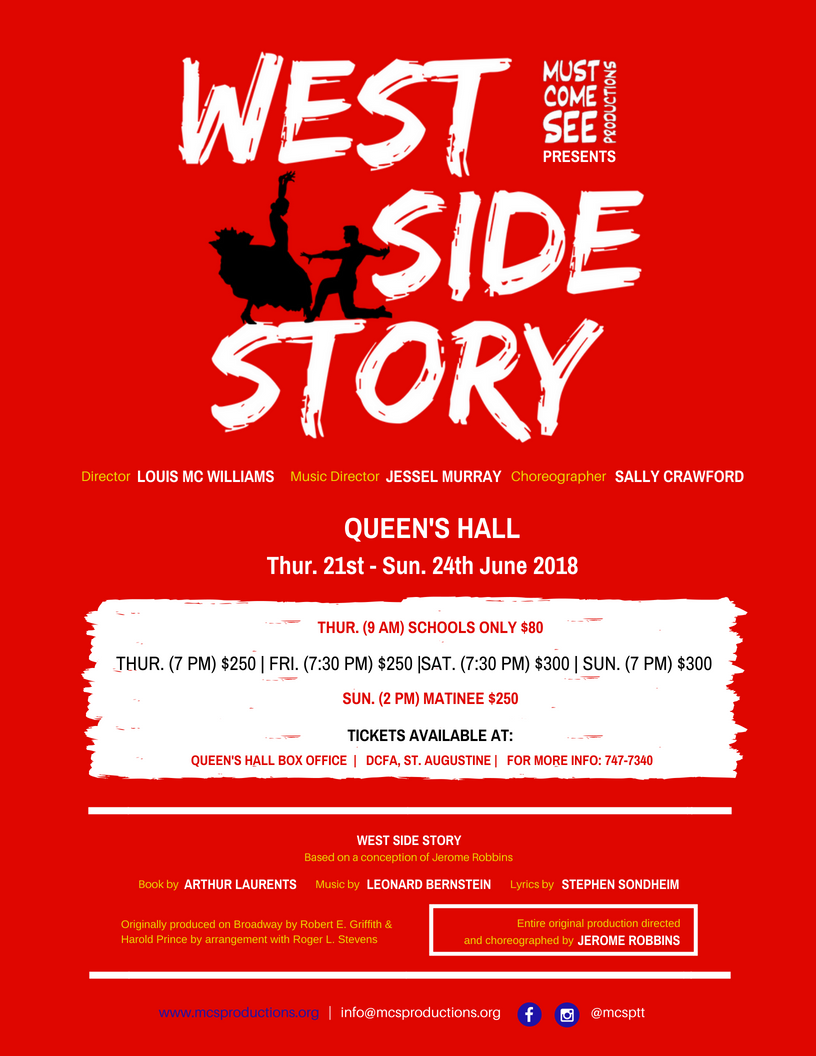 ST. AUGUSTINE, TRINIDAD, W.I – MCS Productions is back – bringing authentic Broadway to the local theatre landscape. With a professional adult cast, and under the licensing of Music Theatre International, MCS Productions (Must Come See) in association with the Department of Creative and Festival Arts, UWI (DCFA), proudly presents the Broadway classic West Side Story. This musical production will run from Thursday June 21st through Sunday June 24th 2018, at Queen’s Hall. Thursday’s performance starts at 7 PM, while the Friday and Saturday performances start at 7:30 pm. There will be two Sunday performances: a matinée at 2 pm and an evening performance at 7 p.m.

MCS Productions, an outgrowth of the UWI Arts Chorale at the DCFA, has been a leader in Broadway productions since 2005; best known for the Cacique Award-winning productions of Fiddler on the Roof, Oliver!, The Sound of Music, Disney’s Beauty and the Beast, and Elton John and Tim Rice’s Aida. MCS productions presents this authentic classic in its original form. Based on Shakespeare’s drama “Romeo and Juliet”, West Side Story is the timeless classic tale of two young star-crossed lovers Maria and Tony who, in the midst of deep-seated rivalry of two warring factions, have a chance to show that ancient grudges are no match for true love.

A spectacular amalgam of some of the most iconic of Broadway music including “Somewhere”, “Tonight”, “I Feel Pretty” and “America”, energetic and athletic dance battles, with a remarkably salient social message, West Side Story remains one of musical theatre’s most revolutionary and most loved treasures…truly the highlight of the summer season!

Maria will be played by Zayna McDonald (Belle in The Scrooge), and Tony by Kyle Richardson (Jesus in Jesus Christ Superstar); Kyle was recently the tenor soloist in the UWI Arts Chorale performance of Carmina Burana at NAPA. Other talented and experienced actors include Michailean Taylor as Riff (Zangler in Crazy for You) newcomer Albert Smith as Bernardo, Syntyche Bishop of the National Theatre Arts Company as Anita, and Chris Smith (King Herod in The Nativity Live) rounds out the impressive cast as Doc.

West Side Story will be directed by Louis Mc Williams, lecturer and Coordinator of Theatre Arts at the DCFA; he is also artistic director of the award winning Malick Folk Performing Company. Jessel Murray, the country’s most experienced conductor of musicals and the DCFA Head, will be the music director as well as the conductor of the live band that will accompany. Sally Crawford-Shepherd, the Coordinator of Dance at the DCFA, will choreograph, and Dara Jordan-Brown will serve as the scenic designer. The veteran team of Donna Bertrand and Asha Stewart will stage manage the production. Co-producer Jessel Murray gushed that he is delighted to have MCS return to the stage after four years with this landmark work of music theatre!