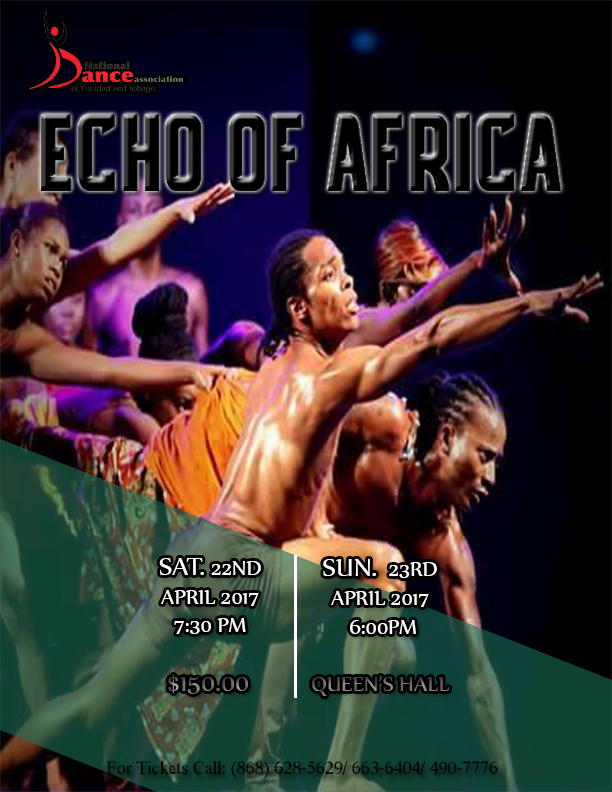 “Echo of Africa” is a folk ballet that dramatizes the journey of the African descendants as they were captured, enslaved and integrated into life in the “New World.” This journey through dance is under the Creative Directorship of Mrs. Emelda Lynch-Griffith, President of the National Dance Association of Trinidad and Tobago.  This production premiered in July 2016 for the Opening of the Emancipation Support Committee’s Lidj Yasu Omowale Village held at the Queen’s Park Savannah.

Emelda Lynch-Griffith is a Dance Educator/Choreographer who has been active in the Prime Minister’s Best Village Trophy Competition dance since the inception of the performing arts category of the programme. At that time she was a dancer with the Jean Coggins Dance Company and later in 1970 she became the tutor with the Barataria Community Council. Through her work with that community she was granted a government scholarship to study dance in the United States of America… in 1978 where she obtained a Bachelor of Science Degree in Dance Education in 1983 from New York University.

On her return home in 1983 she returned to the Barataria Community where she was part of the winning team that saw Barataria in winners’ row on several occasions between 1984 and 1991. She copped the prize of Best Choreographer on three occasions during that period in addition to receiving prizes for Best Dance in several categories. In 1992 she became the first Artistic Director of the National Dance Theatre Company of Trinidad and Tobago to represent Trinidad and Tobago in CARIFESTA V that was held in Trinidad. And later in 1998 she started her own company called “Dance Construction- School of Dance and related Arts.