Renaissance Productions – #Nothing Else but… The Classics in Praise and Worship 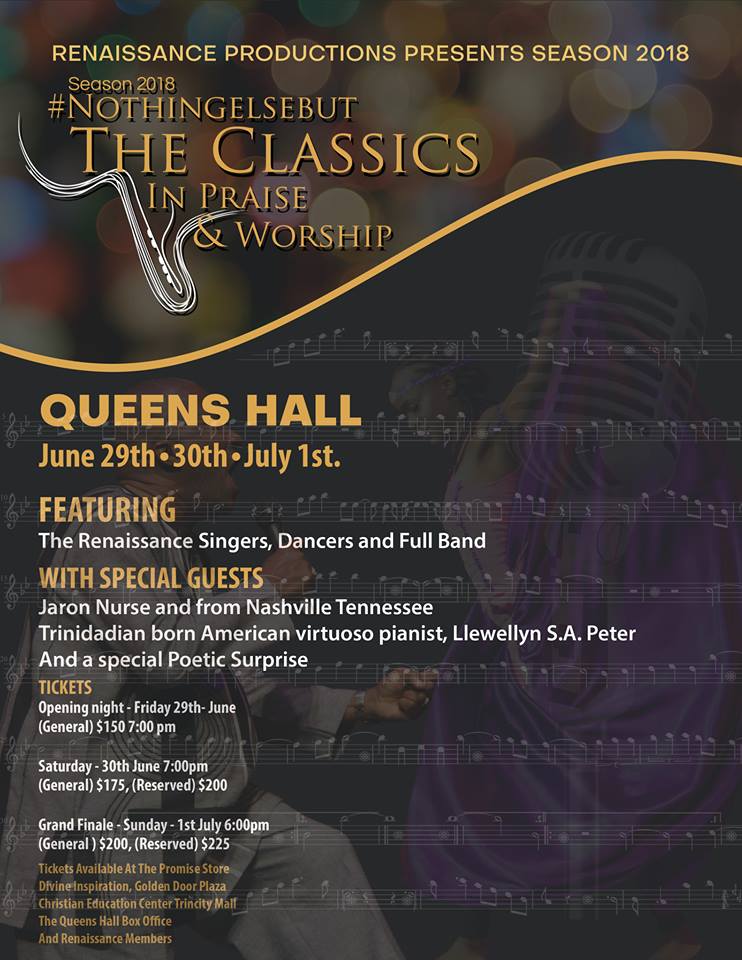 Since its inception in the mid 1980’s, Renaissance Productions Company has been staging gospel theatrical productions annually.

Driven by a consuming desire to effect change in the presentation of talents especially within the Christian genre, Renaissance pioneered this level of performance within the Evangelical Church movement.  Its theatrical journey was launched, with a production aptly titled ‘The Beginning’ at the Stolmeyer’s Castle with one vocalist and a pianist.

Now some thirty years later, Renaissance has transformed into a full-fledged production company that has gone beyond a desire for talent improvement and evolved into a vehicle where inspirational philosophies can be shared.

Many who have identified with this cause, have freely given of their talents and include vocalists, musicians, dancers, choreographers, costume designers, set designers, lighting technicians, stage managers, graphic designers, photographers and more.

Under the direction of its founder J. Errol Lewis, the company has taken its brand of gospel throughout Trinidad and Tobago, the Caribbean and South America with performances in Barbados, St. Vincent, Grenada, Suriname and others.  As much as possible, many different facets of theatre are utilized in its productions, which include vocal performances, dance, poetic expressions and plays.

This year the focus is on music, more the specifically the classics.  Hence the Season is called “Nothing Else but the Classics in Praise and Worship.”

The production will be enhanced by Trinidad-born American virtuoso pianist/ Llewellyn S. A. Peter, who will play a major role in arranging some of our classical pieces.  Mr. Peter is classical pianist, choral music director, teacher and vocal coach who is extensively qualified in Music and Piano Education and Administration.

Our very own, local gospel artiste Jaron Nurse is also expected to offer a classical performance in our Grand Finale.

Llewellyn St. Aubyn Adrian Peter holds certificates in Piano and Music
Theory Grades 1-8 from The Associated Board of the Royal Schools of Music, and The international music examinations board of Trinity College, London, England.

In June of 2013, Mr. Peter finished his certification program in Administration and Supervision at Lipscomb University. The passion of piano performance has allowed Mr. Peter to tour the United States, Canada, the Caribbean, and abroad.  Among his many performances, was a concert given at the Armed Forces Base in Ramstein Germany, and in the United States, a private performance for entertainment mogul Oprah Winfrey which was given in December 2004.

In addition to performing, Mr. Peter is a committed Music Educator. He has taught in the Rochester City School District in New York, Fisk University, the Choral and Piano Instructor at Pearl-Cohn Entertainment Magnet High School in Nashville, Tennessee, and is currently the Dean of Students at Hattie Cotton Elementary Magnet School in Metropolitan Nashville Public Schools

His awards and honors for excellence in teaching music include, Who’s Who Among American Teachers, the National Conference of Community and Justice Middle School Educator of the Year, the Chancellor’s List, Metropolitan Government of Nashville City Council and Davidson County, Outstanding Community Service Resolution No. R98-1325, and a Sallie Mae Award nominee.

Mr. Peter has begun doctoral study at Capella University in Educational Leadership and Management, while continuing to perform. In the spring of 2010, Mr. Peter released his first piano project entitled “Songs That My Mama Taught Me.” This recording showcases the arrangements of hymns by Mr. Peter.