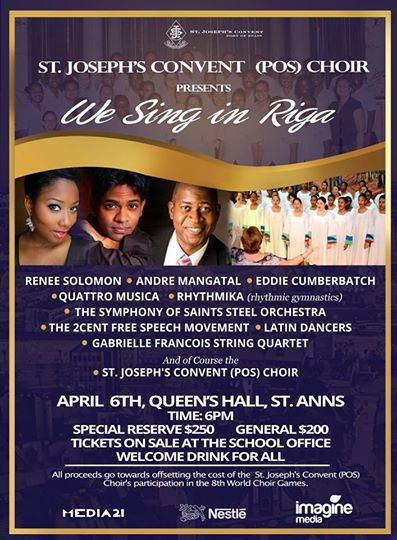 Tickets are out for the St. Joseph’s Convent Port of Spain Choir Concert, We Sing In Riga! Earlier this year the school held a media conference to announce the Choir’s participation in the World Choir Games 2014, Riga, Latvia. The World Choir games is known as the ‘Olympics’ of choral festivals. St. Joseph’s Convent (POS) Choir will be the first choir from the Caribbean to be accep…ted to perform at the World Choir Games. In addition, the adjudicators were so impressed with the track record of the Choir at international festivals that they invited them to enter the very prestigious Championship Competition.

At the media conference it was also revealed that the Choir needed to raise approximately TT$1million to cover the cost of the trip. In this regard, the Choir will be hosting a concert at Queen’s Hall on April 6, 2014 featuring the likes of Eddie Cumberbatch, Andre Mangatal, Renee Solomon, The Symphony of Saints Steel Orchestra, Latin dancers, the 2Cent Free Speech Movement, Rhythmika (rhythmic gymnastics) and of course stunning performances by the award-winning St. Joseph’s Convent (POS) Choir.

All proceeds from the concert will go towards offsetting the cost of the trip. Corporate Sponsors such as Nestle, Media21 and Imagine Media have already joined the effort to make the concert a success. Tickets may be purchased from the school (625-4502) and members of the Choir and from April 1 at the Queen’s Hall Box Office.