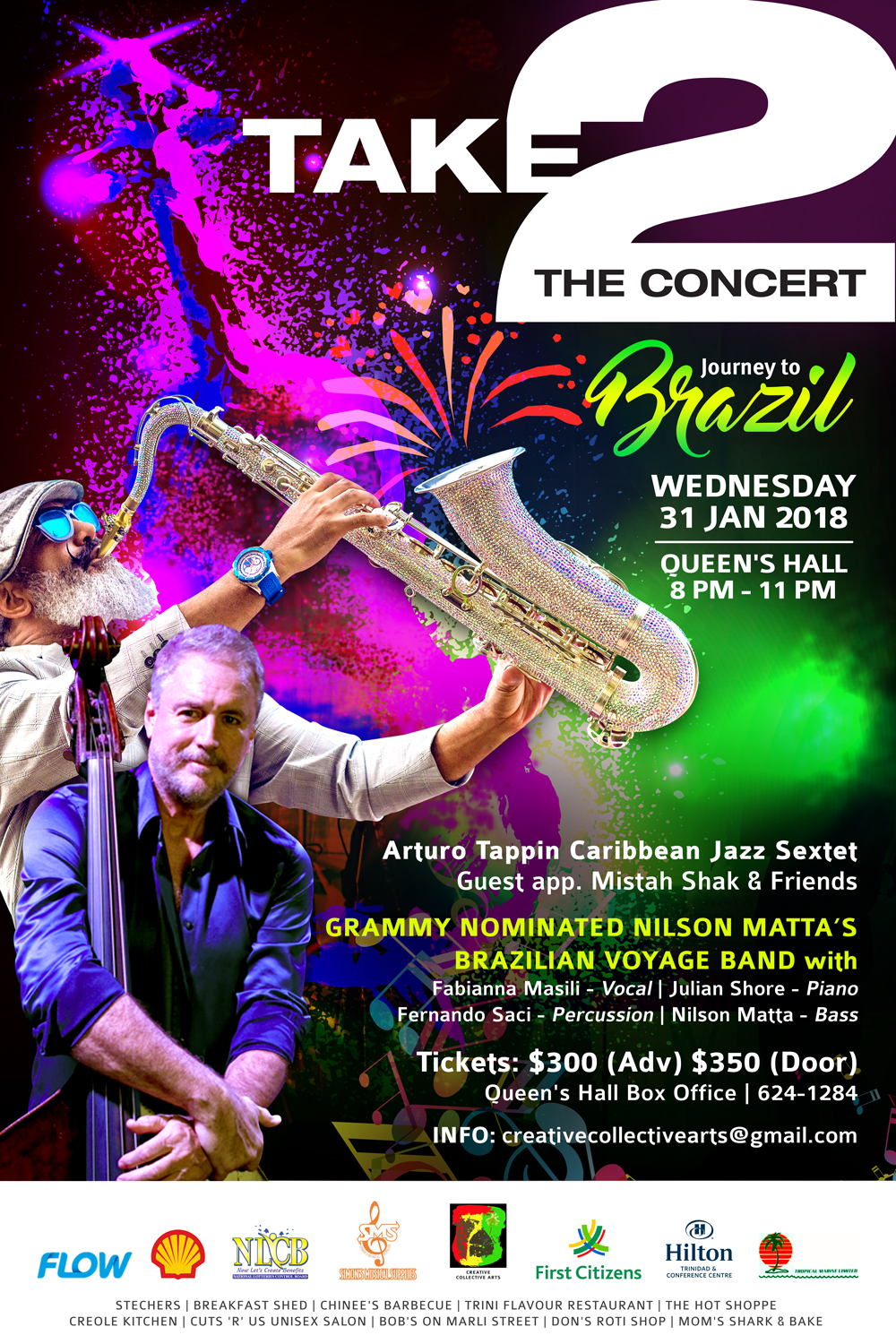 Take 2 The Concert: Afro Calypso & Latin Jazz Fusion, Wednesday 31 January 2018 is HERE.  According to Producer Sean Thomas “The theme for the second annual fundraiser is Journey to Brazil. In 2018, we continue the drive to raise funds towards musical and educational projects of the Jazz Alliance of Trinidad & Tobago. We know you deserve the best and so we are excited to invite you to treat yourself to world-class entertainment while contributing to national development. Based on your response to the inaugural event which was held in February 2017, we are happy to highlight our headline act Grammy nominated, Nilson Matta’s Brazilian Voyage Band, featuring, on vocals- Fabiana Masili, percussionist-Fernando Saci, pianist-Julian Shore and Bassist-Nilson Matta.

We look forward to the return of Mistah Shak & Friends and, of course, the Caribbean’s smoothest and saxiest horn musician, Arturo Tappin, performing with his Caribbean Jazz Sextet. In 2018 the acclaimed Mr. Tappin and his six-member band will excite patrons with a bonus performance that must be experienced!” Advanced tickets priced at $300 are now available at Queen’s Hall’s Box Office and the price goes up to $350 at the door so get those tickets early.

Take 2 The Concert: Afro Calypso & Latin Jazz Fusion is a production of JATT and is presented by a local non-profit, Creative Collective Arts (CCA). CCA was founded on January 16 2013 with a mission to create a vibrant and sustainable community of cultural workers and performers, in the interest of national development and also, to positively intervene in artistic and cultural activities by contributing to community activities that support artists and their contributions. CCA’s first production was Sing Jouvert, a 2014 Jouvert band, which landed first place in the Downtown Carnival Competition. The NCBA placed the band third in its competition. CCA’s second project was in partnership with JATT’s inaugural event in February 2017 – Take 2 The Concert: Afro Calypso & Latin Jazz Fusion which featured Mistah Shak & Friends, Arturo Tappin Band and 2017 Grammy Award winner, Arturo O’Farrill, with his Afro Latin Jazz Ensemble.