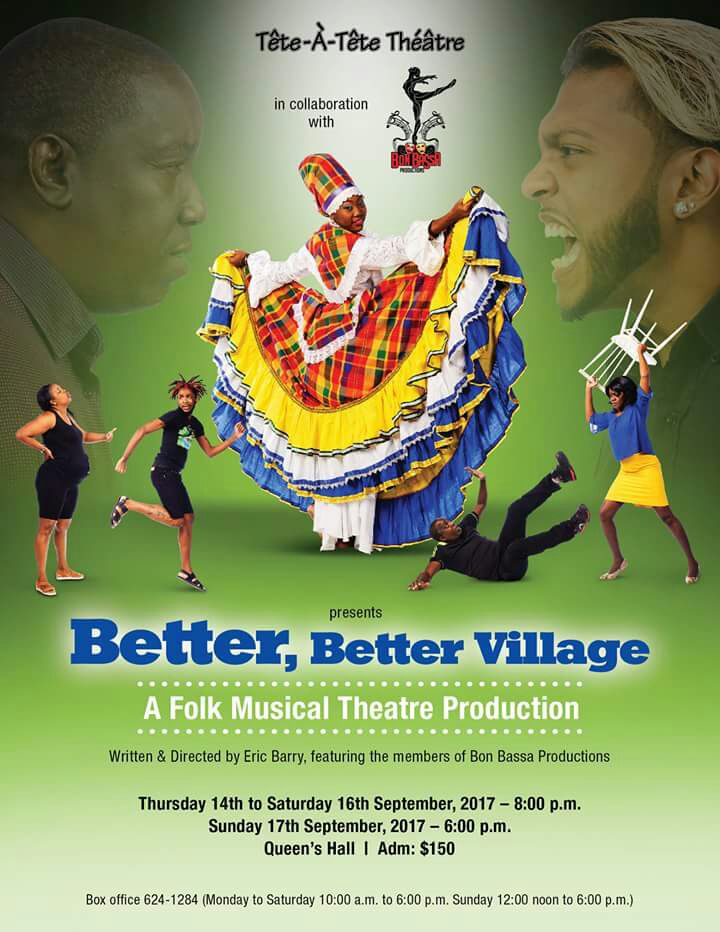 Better, Better Village is about Mr. Roberts, an aspiring playwright, who is also the son of a deceased world acclaimed playwright. Mr. Roberts dreams of being as renowned as his father, but his talent is nowhere close in comparison. Rejected by his peers, he gravitates to a folk theatre company to have them do his work at the annual folk theatre competition. In this arena he experiences culture shock as this world is governed by a discipline alien to him.  Among the talented cast is Deloris Alexander, President of Bon Bassa Productions, who is well known in the comedy festival arena. This production placed second in the 2017 Prime Minister’s Best Village Competition.

Better, Better Village opens at Queen’s Hall on Thursday 14th at 8pm and runs nightly until its 6pm finale on Sunday 17th September. Tickets priced at $150 are available from 10am to 6pm at the Queen’s Hall Box Office.

“The first time I performed on the Queen’s Hall stage was in 2003 when I played Papa Neeza in the Davlin Thomas spectacle, The Golden Masquerade, which was the Trinidad and Tobago entrant at Carifesta that year. Everything about that experience was exciting and memorable; representing my country, being in a grand, musical production and to finally walk the boards of the iconic Queen’s Hall. I produced my first show at Queen’s Hall in 2010. It was an ambitious production called ‘Round the City. I was trying some innovative things in terms of the writing style, the direction towards the acting and some technical aspects. The “experiment” seemed to have worked as the audiences were riveted each night. I do recall being very impressed by the assistance I was given by the QH crew in all departments. Better, Better Village is my first show since then and again I am very impressed. “