The late 1940s early 50s was, for many in Trinidad, a time of tremendous optimism and hope. The Second World War was over, and slowly but surely, the austerity that was par for the course during the war was fading away. All around the Caribbean, independence movements were gathering momentum, and there was talk of a West Indies Federation that would unite the region.

Culturally, there was a burgeoning awareness of the pleasures of leisure and entertainment. Numerous cinemas around the island showed the latest Hollywood flicks to often packed houses. The newspapers reported constantly on the exploits of Elizabeth Taylor, Humphrey Bogart and Bette Davis. Trinidadian performers such as Winifred Atwell and Geoffrey Holder were enjoying success overseas, and thriving local operatic and dramatic societies meant there was no shortage of plays and performances to go to if one was so inclined. With the formation of the Trinidad All Steel Percussion Orchestra (TASPO), steelpan was beginning to gain the legitimacy and societal acceptance that had so far eluded its development, and in 1948, the Trinidad Music Association held its first bi-annual Music Festival.

The festival – which ran for a number of weeks – took place in locations around the country, with the major competitions being held at the Roxy Cinema, Globe Cinema, and the Boy Scouts Headquarters in St Anns. The Festival enjoyed both a high number of entrants and tremendous support from a public hungry for quality musical performances. A delighted editorial in one Sunday Guardian proclaimed that, “Amid the harsh noises of our day, the thunder of atomic projectiles and the brazen clash of ideologies, how comforting to know that the soul of a people can still find expression in some simple song or low, sweet prelude!”1 The first Music Festival received 572 entries. By the second festival, which took place in 1950, entries had doubled to just over 1000, and singers and musicians performed to packed audiences in locations that were far from ideal.

Acoustics, lighting, seating and facilities for performers were all problematic and often sub-standard in the venues used for hosting live performances. But Festival organisers had little choice – the fact is that nothing had been purpose-built for the live performing arts, so people made do with the few existing locations. In an article in the Trinidad Guardian, Aubrey Starck, President of the Trinidad Dramatic Club, wrote:

“What is so remarkable is that there is, in fact, no theatre here, for there is so much talent which could be developed and presented in a form that will draw the crowds and provide excellent entertainment.

“Turning to what is usually described as the ‘legitimate’ stage, we have the plays presented by the Whitehall Players, the Arts Theatre, the Trinidad Dramatic Club, to say nothing of the excellent shows which come from the Southern Dramatic Society and others. “What facilities are there for presenting these various forms of entertainment?”2

The seed for a concert hall

It was around 1950 that the seeds for a concert hall were sewn in the then chairman of the Trinidad Music Association (TMA), May Johnstone 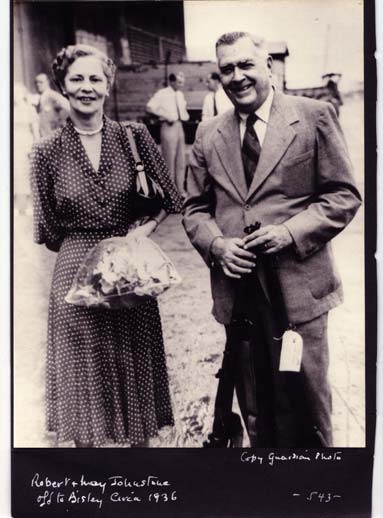 Born in England in 1900, Helen May Johnstone (née Russell) came to Trinidad aged 6, when her father, Justice A.D. Russell was appointed to Trinidad’s Supreme Court. Educated in England, May returned to Trinidad in 1921, whereupon she met and married Robert Johnstone. She taught choral lessons at Bishop Anstey High School and in 1941 the TMA was formed under her chairmanship. To judge the 1950 Music Festival, May Johnstone and the TMA invited an English adjudicator, Dr Sydney Northcote. Deeply impressed by the standard of entries in the Festival but recognising the inadequacy of the venues in Trinidad for effectively staging such concerts, Northcote quickly began clamouring for improved facilities for the hosting of performance events.

But the issue of a concert hall for Trinidad was by no means a new one. Letters to the press persistently bemoaned the dearth of proper facilities. In a letter to the editor of the Trinidad Guardian, Cecil Gray had this to say: “…the years go by and our theatre remains a dream. Our ‘leaders;’ have taken up other causes – popular ones, of course – while unstintingly paying lip service to the idea of an adequate concert hall, auditorium and theatre. Unless some group or individual takes on the task of marshalling public opinion and support, then this state of apathy will continue.”3

In truth, with so much of the country requiring basic services such as water and electricity, the Government could well argue that the spending of public funds for the purpose of entertainment could not, in all fairness, be justified. None-the-less, May Johnstone and Dr Northcote immediately became the strongest proponents of the development of a concert hall that would be dedicated to the performing arts. Of his experiences at the 1950 Music Festival, Dr Northcote wrote:

“The festival extended over a fortnight. It was held at the only building available, the Scouts Headquarters in Port of Spain, which was totally inadequate for the purpose. The vast throngs of people who came to every session had to queue for never less than an hour each time, in the hope of getting a seat; but the majority had to be content to sit outside. The competitors had perforce to wait in adjoining hutments out of sight, only hearing the proceedings through loud speakers which had been connected with the main building. Yet their patience and zeal never wavered. “But the lack of a proper festival hall, or even anything approaching it, is undoubtedly most serious. Apart from the musical festival, there are other important manifestations of native culture, in drama and dance and the like, which are similarly handicapped. “The project for which I am now appealing to you is one which I confidently predict will have the most far-reaching influence in the social and cultural welfare in the whole colony.”4