Love Movement celebrates with “Colours of His Love”

Home / Articles / Love Movement celebrates with “Colours of His Love” 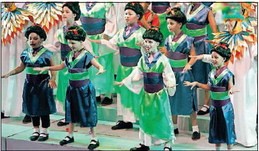 These significant achievements will be celebrated at the group’s 2018 Production ‘Colours of His Love’ at Queen‘s Hall, from November 9 to 11.

The Love Movement, founded in 1972, is a registered charitable organisation and has long outgrown the conventional confines of a choir, to become a truly unique organisation with a life-changing mentoring programme among the country’s ‘at risk’ youth. The Love Movement uses the performing arts and spiritual guidance and relevant youth programmes to provide holistic and social development to achieve its goals.

They have received many national and international awards for their outstanding contribution to cultural,

The Love Movement’s concerts are used as the avenue to showcase the talents of these young people and provide them with the opportunity to experience a level of achievement and self-worth. More significantly, they mature, acquiring an understanding of the impor- tance of hard work, commitment and self-sacrifice. These children and youths come from over 20 primary schools and 15 secondary schools and many of them are from underprivileged homes or live in institutions.

At the shows this year, patrons will experience an unforgettable blend of exciting music, choreography, costumes and stage design. The entire cast will begin the evening’s programme by giving thanks to God for His tremendous blessings over the years with soul-stirring and popularGospel songs.

The Senior Choir will then pay tribute to Andrew Lloyd Webber with excerpts from his many musicals. The members of The Love Movement Republic Bank Youth Outreach Group and the Senior Choir will present songs from The Greatest Showman, a movie based on the life story of PT Barnum, that recently took the world by storm.

It features songs like ‘A Million Dreams’, ‘The Greatest Show’, ‘Never Enough’, ‘From Now On’ and Oscar-nominated and Grammy Award-winning song ‘This Is Me’. The Lights of Love Children’s Choir will perform selections from the movie

Frozen, every child’s favourite. To bring down the curtain on what promises to be a spectacular production, the entire cast will usher in the Christmas season with some of the world’s most beautiful and heart-warming Christmas songs and carols.

The technical team for this production includes some of the country’s best: Frank Agarratt, assisted by Corey Burnham for sound, Celia Wells as lighting designer and stage set and decor design is by Randal Halfhide of Another Idea.

A special Children’s Charity Concert will be held on November 5 at 3 p.m. for hundreds of children from several institutions and children’s shelters.

The Love Movement is seeking assistance with sponsorship of tickets for these children who look forward each year to an unforgettable evening of fun and thrilling entertainment. The tickets for this show are $100 and assistance from individuals or corporate sponsors would be deeply appreciated. Persons interested in sponsoring these tickets can contact Bernadette at 624-4474. Truly a wonderful gift for the less fortunate children, youth and differently-abled persons.