For the past twenty years he has been a leading exponent of the oral traditions in a variety of fora, of which his Carnival Talk Tent has become a landmark. A self-published author, he has to his credit nine volumes of work, sixteen cds, seventeen  LPS and two videos. The remarkable thing about his work is its wide appeal, an appeal that covers all classes and age-groups.

Here is the Transcript of our Conversation with Mr. Paul Keens-Douglas: 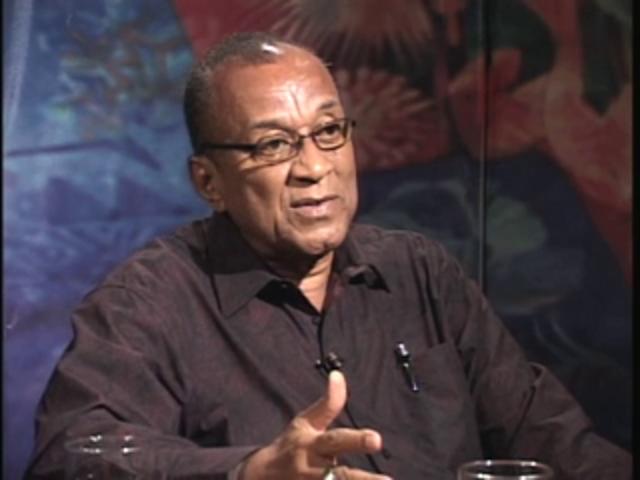 Paul Keens Douglas has been entertaining local audiences for 37 years with his storytelling.

Through his colourful characters: Tantie Merle, Vibert, Tim Tim, Slim and Tall Boy among others, Paul has used his personal experiences and keen eye to chronicle life in the West Indies.

That his work was presented in dialect was certainly groundbreaking in Trinidad and Tobago and reflected the influence of Jamaican poet Louise Bennett, who he credits for inspiring his career as a humorist.

It was while undergoing Postgraduate studies in Sociology at Mona, Jamaica, in 1972 that Paul met Louise and decided to switch from writing poetry in standard English to dialect. He wrote The Band Passing, his first piece of poetry in dialect and immediately found his niche.

“Writing in the vernacular freed me because you had to make your own rules there was no one to follow and you could do anything with your poem, put it to music, do anything, there were no rules to follow.”

When he transferred his degree to Trinidad, Paul found a job at Rediffusion, finding time in studio to write short stories, among them the popular Tantie at D Oval. When Rediffusion closed down, Paul moved to Radio Trinidad where he found a platform for his stories. Forced to continue writing when appeals to the public to send in theirs didn’t pan out, he eventually collected so much work that he decided to publish them in a book called When Moon Shine and stage a show called Tim Tim (patois for Once Upon A Time) at the Little Carib Theatre to read the stories.

“I formed a group called Creola. We had writers, a choir and actors. We did the first show and I taped it and I decided to make an LP just as a project and eventually it came back and that had Tantie at D Oval and that really started my career. It got a lot of airplay,” he recalled.