Throughout the sixties and seventies, Queen’s Hall played a central role in not only the creative and artistic life of the country, but also its civic life – helping to provide a forum and opportunity for dialogue on Trinidad’s developing nationhood and national identity.

From its inception, the semi-final round of the Prime Minister’s Best Village Competition was held at Queen’s Hall. It continued to host local and international performers, whilst providing a venue for the Music Festival, school concerts and prize-givings, meetings of a civic nature and various indoor sporting events. With the opening of the National Stadium and the Jean Pierre Sports Complex in the early 80s, Queen’s Hall was no longer needed as a venue for indoor sports, so increasingly, it became used solely as a performance venue, with that requirement being reduced to concerts, dance performances and shows that were easily amplified – the poor sound propagation having just about made it untenable to host plays and theatrical productions. 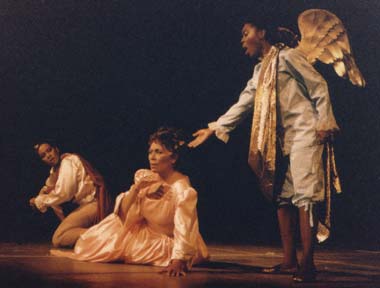 By the beginning of the 1980s – lacking the inspiration and direction of a strong Board, Queen’s Hall was in desperate need of renovations. A cabinet note from November 1983 mandated a newly-appointed Board, headed by Val Rogers, to “be prepared… to explore and introduce ways and means of committing and adapting the facilities to a role of greater relevance to national cultural organisations.” Renovation and restoration were called for as well as a reduced reliance on Government funding.

Although limited renovations were carried out, it became clear that the Board would have to find a way to make the Hall more financially viable. Whilst Government’s subvention provided for the basic running of the Hall – salaries for staff, utility bills and the like, there was never any money in the kitty for development or necessary refurbishment – theatre necessities such as the changing of stage lights or the repairing of broken-down machinery were not budgeted for. Former Chairman, Val Rogers, says, “there was so much that needed to be done to the Hall, but we never had enough money, so all we could do was a sort of bandaid treatment.”

So the Board formed The Patrons of Queen’s Hall – an initiative that (it was hoped) would encourage more public involvement in the Hall, whilst being an active fund-raising body that could “promote Programmes in the Performing Arts for the benefit of the Theatre going audience.” Although it was envisioned that the Patrons would operate under the authority of the Board of Management of Queen’s Hall, they became an autonomous body that operated independently of the Board. The Patrons made significant contributions to both the upkeep and the patronage of the Hall.

Apart from their production of an ongoing calendar of shows by local and international artists, the Patrons were been responsible for several initiatives that are synonymous with Queen’s Hall:

The President’s Honour Performance – a night of paying homage to the great entertainers of Trinidad and Tobago.
An Annual Theatre Camp for young people.
Viey La Cou – carnival performances by traditional characters including Pierrot Grenade, Midnight Robber and stick-fighters.
It was the Patrons who commissioned international acousticians, Arup Acoustics, to produce a report making recommendations on how the sound propagation in the Hall could be improved. Former Chairman of Queen’s Hall, Margaret Walcott, had first-hand experience of the acoustics at the hall:

“Producing shows in Queen’s Hall in the 60s and 70s had certain problems,” she says. “As the noise from the street became louder and louder it became more difficult for the actors to be heard, and that in turn affected how the plays were being blocked, and in the end, the audience reaction.
“I remember Derek [Walcott] doing a play, Errol John’s “Moon on a Rainbow Shawl”, in which the language is simple and it was quite effective [in the Hall]. But when you got into the more difficult plays, it really was a problem.
Arup’s investigation found, “the acoustic problems within the hall are primarily caused by poor signal to noise ratio. This is due to background noise levels within the hall being approximately six times as loud as desirable, combined with poor sound propagation from the stage and ineffective use of sound reinforcement systems.”

The report recommended that, “the principal aim must be to eliminate background noise by insulating the auditorium from both externally and internally generated noise.”

In 1996 the then Minister of Culture empowered the Board to make such improvements as would make Queen’s Hall worthy of the title of National Theatre. Former Chairman, Margaret Walcott, was delighted that this decision was made and immediately began to put the necessary actions in place to begin the refurbishment. Six selected architectural practices were invited to tender for the refurbishment, with Gillespie & Steele winning the contract.