The West Indies Festival of Arts

The West Indies Festival of Arts was a celebration of Caribbean creative and performing arts. The Crown was continuing to relinquish control over its colonies in the West Indies, and the Festival was an ideal opportunity to show Great Britain that the region was united and optimistic. There were art exhibitions and performances by theatrical, dance and choral groups from many Caribbean territories. But of course, with construction of Queen’s Hall only recently begun, organisers of the festival had to deal with the perennial problem of coming up with a splendid venue for the shows. Once again, Colin Laird was chosen to design an 800-seat open-air amphitheatre in the Botanic Gardens. The makeshift arrangement worked well enough, but the West Indies Festival of Arts would have increased the public’s desire to see the Hall built. A plaque commemorating the laying of the Hall’s Foundation Stone, was unveiled by the then Minister of Education, Patrick Solomon, in July 1958.

After eight years of striving towards such a moment, May Johnstone and members of the CCCH Board would have been both jubilant and exhausted. Board member, Peter Rostant, commented that he had “almost despaired of the Hall ever becoming a reality, but it was through determination and with the driving force of Mrs. Johnstone that it had at last begun to take shape.”21 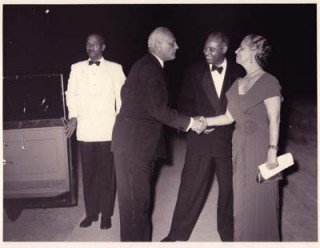 When Queen’s Hall’s opening night finally arrived in June of 1959, it would have been one of the most highly anticipated events of the year. For May Johnstone and members of the Queen’s Hall Board, it was the culmination of years of dedication to a goal, which at times, would have seemed unreachable. Thora Dumbell, who danced at the opening, recalls: “We had waited so long for a theatre for the arts that we all knew it would be something to remember. May had this dream that this would be a theatre for all, and we saw it happen in that week. And for those who were privileged to be here, I think it is something we would want to cherish for the rest of our lives.”

It was a triumphant affair attended by the Governor, Sir Edward Beetham, the Minister of Education, Patrick Solomon and people of all walks of life. The opening programme ran for seven nights, highlighting the range of performance arts extant in Trinidad at the time. Aubrey Adams’ variety show, “The Happy Wanderer”, produced and directed by Pat Castagne, was the main feature. There was music by the Police Band, the Casablanca Steel Band and the John “Buddy” Williams Orchestra, with on-stage performances by Ken Oxley and the Argonauts, Thora Dumbell, Beryl McBurnie and the Little Carib Company, the Mighty Striker and Olive Walke (to name a few). 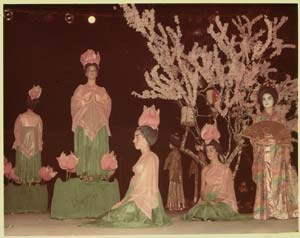 The programme was rapturously received by packed houses, and there was a sense in the press that something momentous had taken place in the opening of Trinidad’s first national concert hall – even if reviews of the actual variety show were at best luke warm. One newspaper reported, “The paint was hardly dry in places and first-nighters noted signs of haste in finishing the hall, but they shared Mrs. Johnstone’s glow over ‘this excitingly beautiful hall.'”

Although her diffidence would have prevented her from taking credit for the Hall, it seems that first night belonged to May Johnstone. Patrick Solomon, Minister of Education said that “While Government has been instrumental in furnishing the funds for the actual building, great credit is due to those whose indomitable will and unflagging energies have been responsible for the realisation of this long cherished dream… I feel certain that in the years that lie ahead Queen’s Hall will fully justify the prolonged labour which gave it birth.”

Words from the Governor, Sir Beetham, aptly defined the vision for the Hall: “I am confident that in the years that lie ahead,” he said, “Queen’s Hall will become the centre of our country’s artistic and cultural life…”